Part 1 – The Russian Invasion of Ukraine: A cybersecurity issue in Canada? 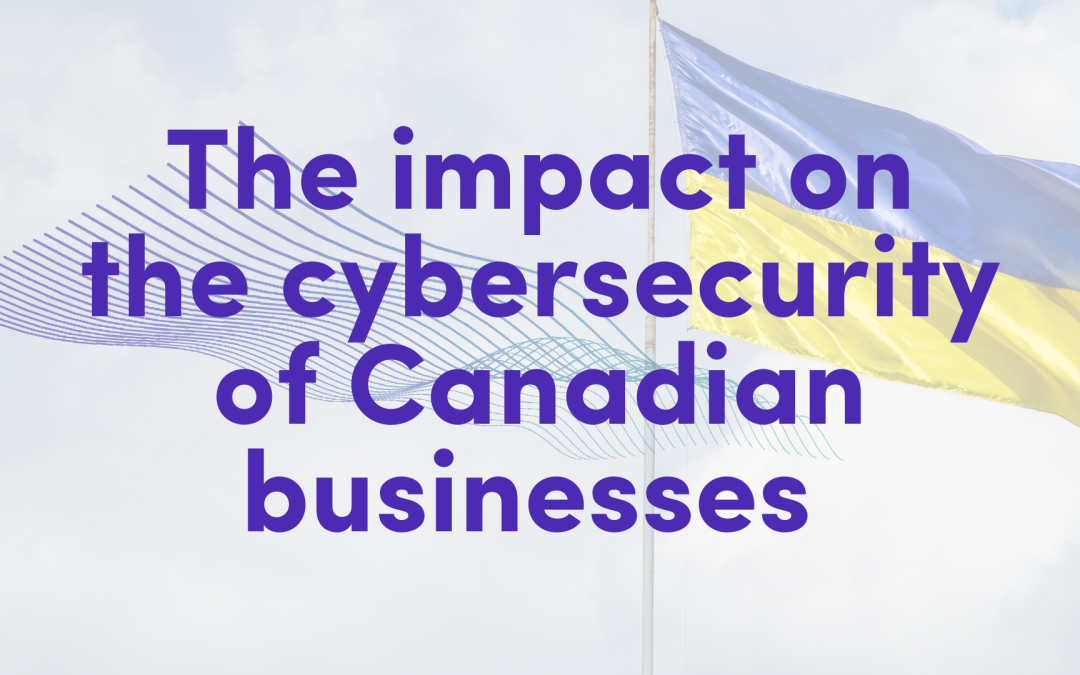 Part 1 – The Russian Invasion of Ukraine: A cybersecurity issue in Canada?

Let’s talk about the war in Ukraine and the consequences on cybersecurity. This is not new, and we all know that a war is a conflict that inflicts heavy economic, environmental, and of course, social consequences. However, it is more worrying when it threatens the current geopolitical order. Russia’s invasion of Ukraine is a good example of this. Since 2014, following the illegal annexation of Crimea, Russia has been on the path to war with its neighbor Ukraine. However, it was in February last year that the Russians officially declared war on their neighboring country and former ally.

The conflict between the two countries generates a significant impact on the rest of the world since each of them holds important natural resources. For example, Ukraine is a major producer of iron and wheat, while Russia is the largest oil and natural gas supplier in Europe. Not to mention that the former USSR also possesses nuclear bombs. Assets that give Russia a great advantage, allowing them to hold off countries that would try to stand up to them by supporting the opposing camp. Even the Russian President, Vladimir Putin, swears vengeance against all those who intervene in favor of Ukraine.

Among their retaliatory tactics, one of the most anticipated and formidable is undoubtedly the threat of a targeted cyber attack.

Indeed, Russia has a strong reputation for using cybercrime, in all its forms, to attack its adversaries. Maneuvers that do not cause death, of course, but which generate serious consequences for all those who are victims.

Therefore, are we in Canada at risk of being targeted by Russian cyber attacks?

Above all, should our businesses be worried about being the target?

Between the East and the West

In Canada, we have the reputation of being a relative pacifist country. We rarely meddle in the hostilities of other nations and try as best we can to maintain some neutrality.

So why would we be Russia’s target? Well, several factors could be contributing to a Russian cyber threat here at home.

First, let’s go back 30 years to when Ukraine formally disassociated from the Soviet Union following a referendum in 1991. A heavy blow for Russia. From then on, Canada is the first country to recognize the sovereignty and independence of the country.

Moreover, despite Putin’s threats, Canada has come out in favor of Ukraine by imposing sanctions on Russia. Another heavy blow…

We are also a western country, operating under a democratic regime as well as a member of NATO. Elements that are very unfavorable to Putin.

But there is another important factor, that of our proximity as well as our alliance with the United States. The greatest power in the world and the sworn enemy of Russia.

Indeed, the government of Vladimir Putin could be tempted to target us to effectively reach our southern neighbors. For example, Hydro-Québec is an energy supplier in the United States. Russia could therefore infiltrate the computer network of the Quebec company to mainly target their great adversary during the Cold War, thanks to a cyberattack.

Can you imagine the consequences?

And this is just one plausible example to consider.

The Russians at Work

Early in the conflict, several countries saw a significant increase in cyber attacks. Even the web giant, Microsoft, has called on the international community to remain extremely vigilant regarding their digital activity as well as their cybersecurity. According to a report by MSTIC (Microsoft Threat Intelligence Center), Russia has infiltrated 128 separate networks across 42 countries other than Ukraine. Still according to Microsoft, these cyberattacks are mainly espionage maneuvers. This strategy allows the Russians to collect important, even confidential, information from countries supporting Ukraine, including Canada.

These criminal acts could have serious consequences with regard to the war in Ukraine, but also on the rest of the world and the country in question.

To counter this and limit the damage, the Government of Quebec has introduced additional security measures, including a budget of $100 million intended “exclusively for cybersecurity” according to deputy Éric Caire.

However, in Canada, it is not just the government and its state-owned enterprises that are at risk. On the contrary, even the private sector can be the target of a cyberattack, although not quite for the same reasons.

As I mentioned above, Canada and others have imposed draconian sanctions on Russia, directly affecting the daily lives of the Russian people. Indeed, it is the citizens of Russia who are paying the consequences. So to counter their economic problems to support themselves, some of them have turned to crime. Or rather, cybercrime.

A tactic that is expensive and pays off. Indeed, a cyberattack can generate costs of more than $80,000. This criminal activity mainly targets SMEs since 73% of them say they are not concerned by the threat of a cyberattack.

So once again, be careful!

Do not miss out on our second part of this article. We are going to dig further in the consequences of a cyberwar on Canadian Businesses.

You own a business and you would like to know if you are protected accordingly: